Sgraffito was a word I came across first on Monday past, on a visit to Portsmouth to see Nelson's Victory. It was in an Ordinariate place of worship after a morning Mass that I met the term, whilst being shown around by its very welcoming parish priest, Fr. John Maunder. St Agatha's, a typically unassuming red-brick Victorian church on the outside, among its other graces and glories - its roof beams; its row of small Roman windows high above the nave, reminiscent of a paleo-Christian basilica in Rome; its series of votive altars in the aisles, from the humble to the magnificent - has an apse adorned with sgraffito. If you are as ignorant as I was, may I inform you that this is an art similar to fresco, except that one uses coloured plaster for the technique rather than painting the plaster when it is wet. The impression it makes is more muted and sober than fresco, and it appears to lend itself to a more stylised treatment of its subject. An analogy that comes to mind is unglazed ceramic is to porcelain as sgraffito is to fresco; but in a building like St Agatha's it is more appropriate.

The workmanship, by a disciple of William Morris, you can see for yourself in this shot:

And in its setting within the apse in the photo below: 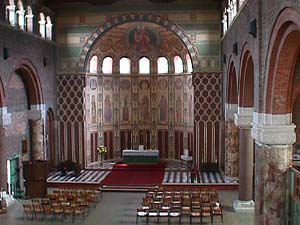 This is a unique church in the Ordinariate in that it was originally Anglican, but fell on hard times with the bombing and destruction of the homes close to Portsmouth's historic docks, following hard on the Great Depression and the Great War. The worshippers were part of the Traditional Anglican Communion until the Ordinariate was erected, and as such they have an English Missal rather than a modern Roman Rite churchmanship. It is true, and I mean to write about this soon, but significant variations in churchmanship do exist in the Ordinariate - unsurprisingly, if one considers the fact that there are big variations in style and ritual within Anglo-Catholicism.


Along the south aisle, St. Agatha the Virgin and Martyr stands beside her altar, crowned, and clothed in this photograph in blood red for the patronal festival.

Apparently they have a new website coming soon, but there are more pictures here. The next big event taking place there is the Solemn High Mass on Saturday 27th September at 11 a.m., for Our Lady of Walsingham's feast.
at May 07, 2014